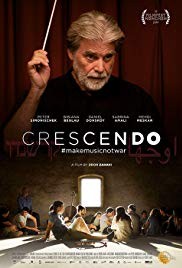 When a world-famous conductor tries to create an Israeli-Palestinian orchestra, he is quickly drawn into a tempest of unsolvable problems. Having grown up in a state of war, suppression, or constant risk of terrorist attacks, the young musicians from both sides are far from able to form a team. Lined up behind the two best violinists -- the emancipated Palestinian Layla and the handsome Israeli Ron -- they form two parties who deeply mistrust each other, both on and off stage. It takes all of the conductors skill and resources to overcome the discord and get them to play in harmony, as the film rises to a tense and emotional finale. Loosely inspired by Daniel Barenboims West-Eastern Divan Orchestra, this is a remarkable theatrical movie and a contribution to the worldwide efforts toward understanding, humanity, and peace.