Torah -- Jewish learning -- lies at the core of Jewish life. The command to teach our children is contained in the Sh’ma, Judaism’s most sacred prayer. Throughout Jewish history, every Jewish community has taken this obligation to heart, building schools for the young and honoring those who devote their lives to learning and teaching. Jewish Federations continue this tradition today.

Federations work in partnership with vigorous national agencies including the Jewish Education Service of North America, the National Foundation for Jewish Culture, and the Jewish Community Centers Association to make Jewish renaissance a reality.

Responding to the recommendations of a joint JFNA- JESNA Special Task Force, Federations are increasing their support to Jewish day schools. The dramatic growth of Jewish day schools from 188,000 students at 600 schools today makes it incumbent upon Federations to partner with others to expand the financial resources available for schools to pursue quality in both Judaic and general studies, keep tuition affordable, and recruit and prepare the personnel needed to ensure that day schools thrive.

The Federation system helps make it possible for thousands of youth each year to explore their Jewish identities in Israel. birthright Israel, an initiative to bring young people for a first, organized educational experience in Israel through generous financial gifts from Federations and other private and public sources, sent 8,000 college and high school students on a variety of programs in 1999 and another 10,000 in Winter 2000.

More than 400 colleges and universities are home to Jewish Federation-supported Hillel Foundations and other Hillel affiliates. Federation-sponsored programs help at-risk students stay in school and prepare for college and careers.

Every year, JAFI, supported by Federations, provides formal and informal training for 11,500 Jewish educators from 75 countries.

Supported by Jewish Federations, JDC initiated the Coalition for the Advancement of Education for Ethiopian Immigrants to develop effective model programs in the towns and cities that are home to 60% of Israel’s 75,000 Ethiopian Israelis, reaching more than 24,000 Ethiopian schoolchildren and their families. 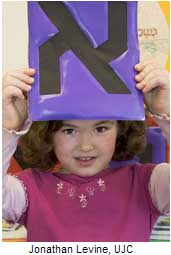