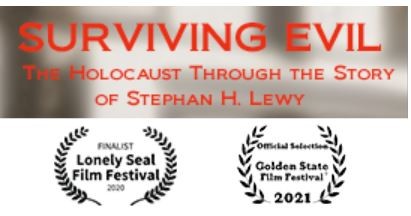 Surviving Evil: The Holocaust Through the Story of Stephan H. Lewy, a Manchester Community Theatre Players/Pack of Dogs production, was awarded the Grand Prize in Hollywood’s prestigious Golden State Film Festival on March 26, 2021. This short historical documentary is based on the life of long-time Manchester NH resident Stephan Lewy. The film chronicles Stephan’s escape from the Nazis, his time in hiding in France, his escape to the United States after the occupation of France, and his eventually becoming an American citizen and fighting in the 3rd Army under Patton, liberating the Buchenwald concentration camp.

Surviving Evil was written by Tom Anastasi and Alan D. Kaplan, directed by Alan D. Kaplan and was narrated by Mr. Lewy with additional narration by Steven Short. Originally written as a stage play through a grant from the Sidor Foundation, it has toured many schools, colleges, and organizations in New Hampshire and Massachusetts (along with a performance in New York City in 2011). Surviving Evil premiered to a sell-out audience at Manchester’s Palace Theater in 2003 and has been seen by over 10,000 people as a play in over 20 different productions.

The film Surviving Evil is available at no cost at MCTP’s website, www.mctp.info, though donations are gratefully accepted. Parents should know there are brief, disturbing images of the Buchenwald camp that were taken on the day of its liberation. For questions, email info@manchestercommunitytheatre.com.

Manchester Community Theatre Players is grateful to The North End Montessori School for the use of it’s facilities for many years.